I know I’ve said this before, but I often make a ton of waffles (or pancakes) and then freeze them for my kid’s daily breakfast. It’s something I’ve done since they were really little, as I wasn’t happy with the ingredients found in store bought frozen waffles. Also, the taste of the “healthier” versions out there can be awful, and they are super expensive when you have three kids who like to eat a lot in the morning! One box would only last us a morning or two, at most.

For a long time I made a waffle recipe that had oil in it, and didn’t really know how waffles could be oil free and still delicious, but now I know!!

Aquafaba….Yes, that strange liquid from a can of chickpeas. I know it seems like such a strange item, but it’s pretty magical. Plus it’s cheap (way cheaper than OIL) and you don’t have to go to Whole Foods to find it. Save your chickpeas for a salad or maybe this Chickpea and Eggplant Curry. So even though these waffles are primarily for the kids, these Vegan Whole Grain Flax Waffles are healthy enough for my husband and I to eat without feeling any guilt!

I think you will love these waffles. They are

Tender on the inside

These Vegan Whole Grain Flax Waffles freeze beautifully. I like to stick my waffles in the toaster and toast until heated through and crispy. You can also heat them up in the oven at 400 degrees until warmed through if you prefer.

Adapted from this recipe. 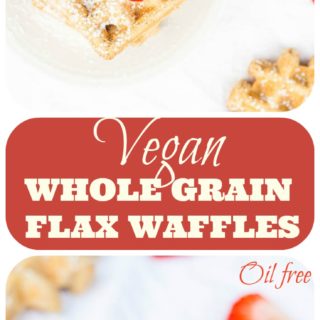 For the aquafaba, simply open a can of chickpeas and drain the liquid from the can to use. Save the chickpeas for another use.
Did you make this recipe?Mention @nora_cooks_vegan_ or tag #noracooks!
Previous Post: « Chickpea and Eggplant Curry
Next Post: Healthy Meal Plan #1 »