I found out a few weeks ago that my little man is a little low on iron. Not low enough to require iron supplementation, but low enough that I want to make sure he’s eating foods rich in iron. It’s actually pretty normal for babies to get a little low on iron sometime in the first year or after 1, because their iron stores from birth usually only last 6-12 months and then they need to get iron from food sources.

It makes sense, really, because Jonah loves to nurse and he adores fruit. Not a lot of iron in either of those! And I’ve sort of let him get by with that until now, because hey, fruit is good for you. 🙂 So, now that he is 16 months old, I’m trying to do a few things different. I still nurse first thing in the morning, and several times during the day (and sometimes at night), but I am attempting to usually offer him snacks and meals FIRST, and then nurse him as often as his heart desires. 🙂

I’m also trying to give him iron rich foods as often as possible, and combine them with foods high in Vitamin C. For example, for breakfast I might give him oatmeal with hemp seeds and some cut up oranges. Or apple slices and whole grain toast. So far, my plan is working and he has been eating very well, most of the time. Some other iron rich foods that are plant based are beans, tofu, soy, tempeh, brown rice, quinoa, fortified cereal like multigrain cheerios, nuts and seeds, raisins, dark leafy greens, and hummus.

These Pumpkin Molasses Mini Muffins are a winner with not only him, but my whole family! They are rich in iron due to the spelt flour and molasses. Molasses is a rich source of iron and natural sweetener. These are pretty sweet, and I’m sure you could cut the sugar in half if you want a less sweet muffin. These are perfectly moist, light and fluffy despite using whole grain spelt flour, and will make your house smell amazing.

Inspired by Oh She Glows and this book. 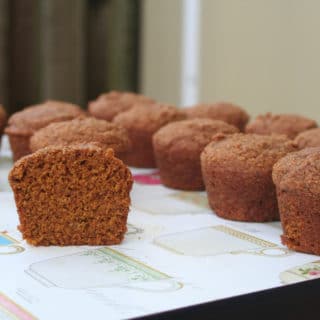 Did you make this recipe?Mention @nora_cooks_vegan_ or tag #noracooks!
Previous Post: « Vegan Sweet Potato and Black Bean Chili
Next Post: How to Prep Romaine Lettuce to Last All Week »