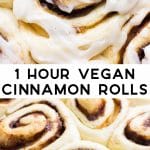 Super soft and delicious vegan cinnamon rolls can be made in 1 hour! Loaded with cinnamon sugar gooey goodness and topped with heavenly vegan cream cheese icing. You won’t believe how big and fluffy they are! 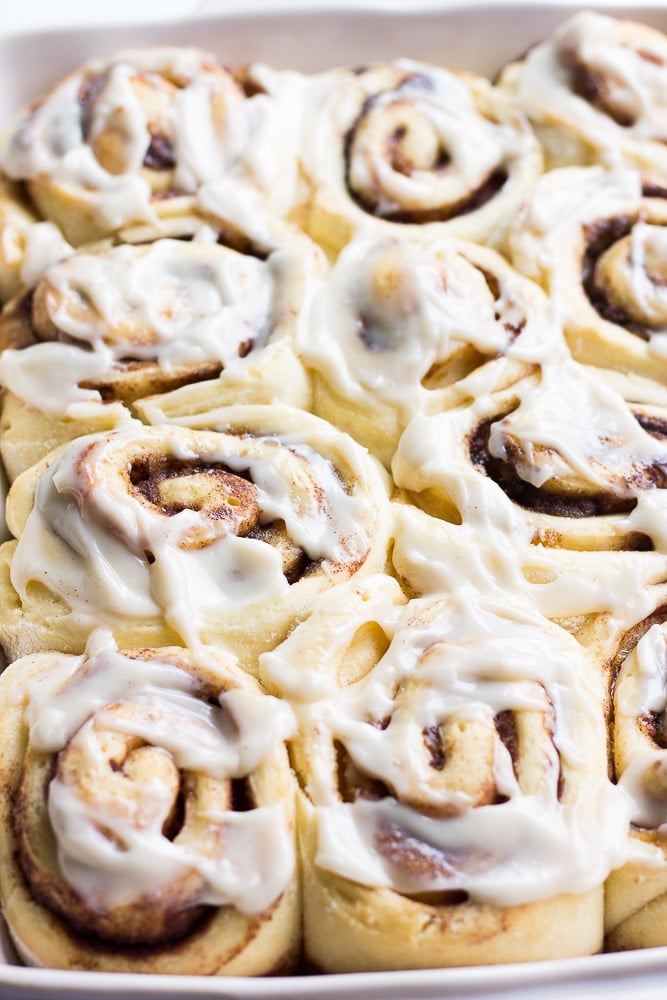 The amount of cinnamon rolls I have been making lately is out of control. I have been determined to get this recipe just right, and after an insane amount of trial and error, I am finally HAPPY with the result! 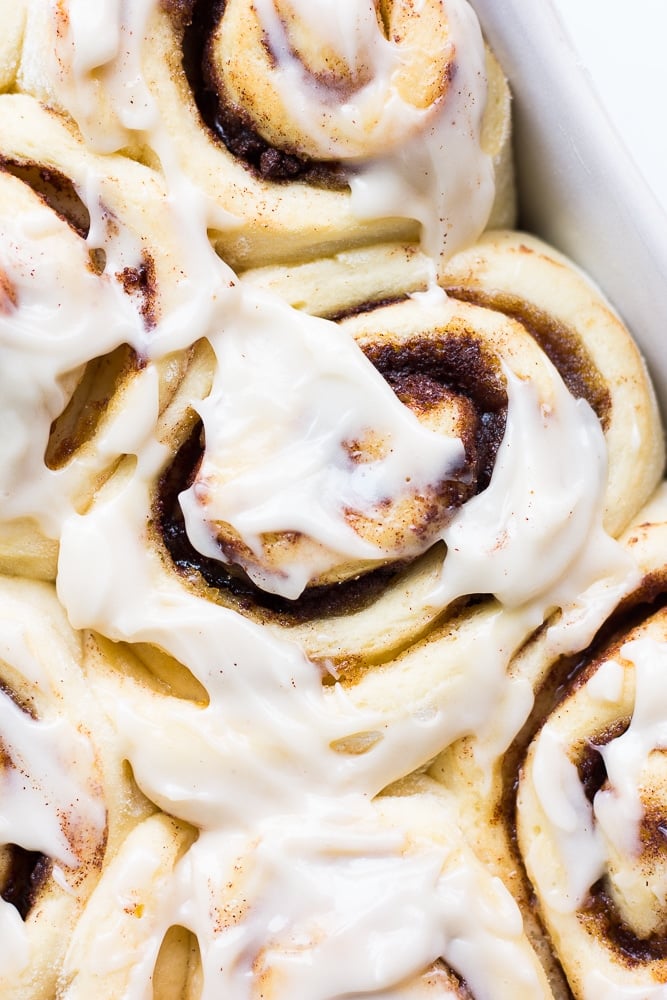 How do you make 1 hour vegan cinnamon rolls?

In a large bowl, add warmed soy milk, sugar and quick cooking yeast. Let it sit for 5 minutes, until it gets a bit foamy. This is how you know your yeast is fresh and working. Add the melted vegan butter, salt and flour, and mix. Add 1/3 cup more flour at a time, as needed. The dough should still be slightly sticky and soft.

Turn the dough out onto a lightly floured surface, and knead for 3-4 minutes, until a smooth ball of dough is formed. Place the dough back in the bowl, cover with a towel and let rise in a warm place for 20 minutes. It should nearly double in size. WHAT I DO: I preheat the oven to 170 degrees F, then once heated turn it off, place the bowl inside and leave the door cracked. Works beautifully. 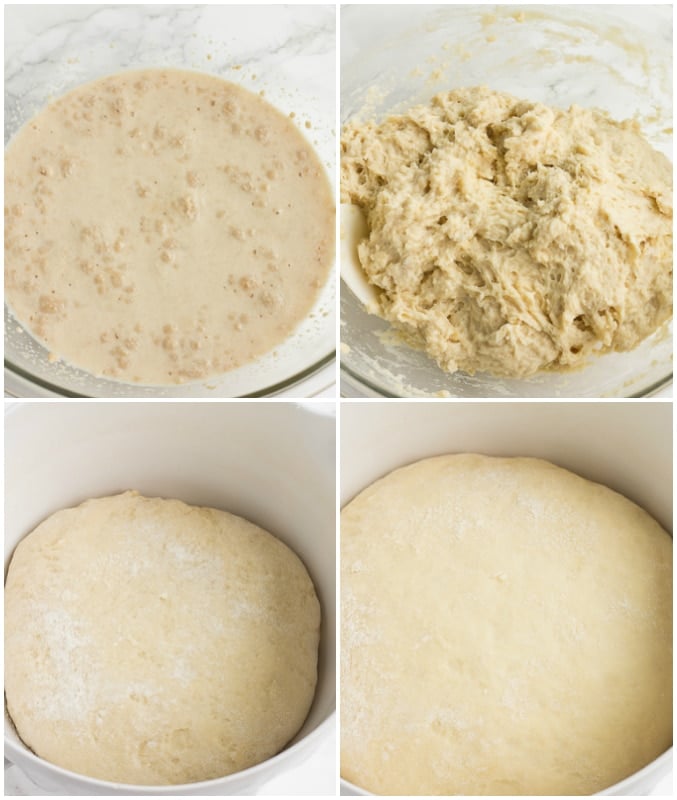 Starting with the long end closest to you, roll up into a tight log. Cut off the ends with no filling, then slice into 12 rolls. 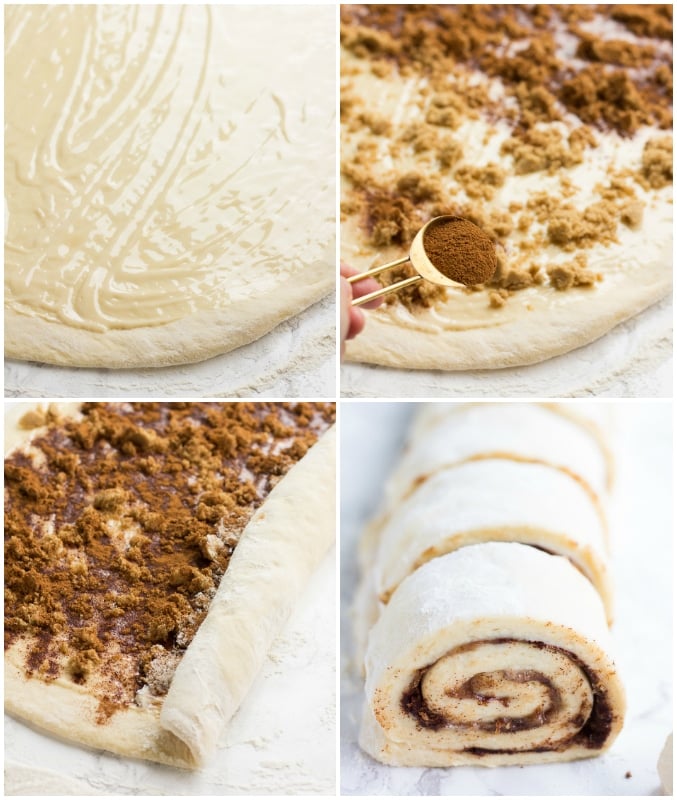 Place the rolls in a 9 by 13 inch casserole dish or (2) 9 inch pie pans. Bake for 20-30 minutes, until the rolls are golden brown and the centers are cooked through. 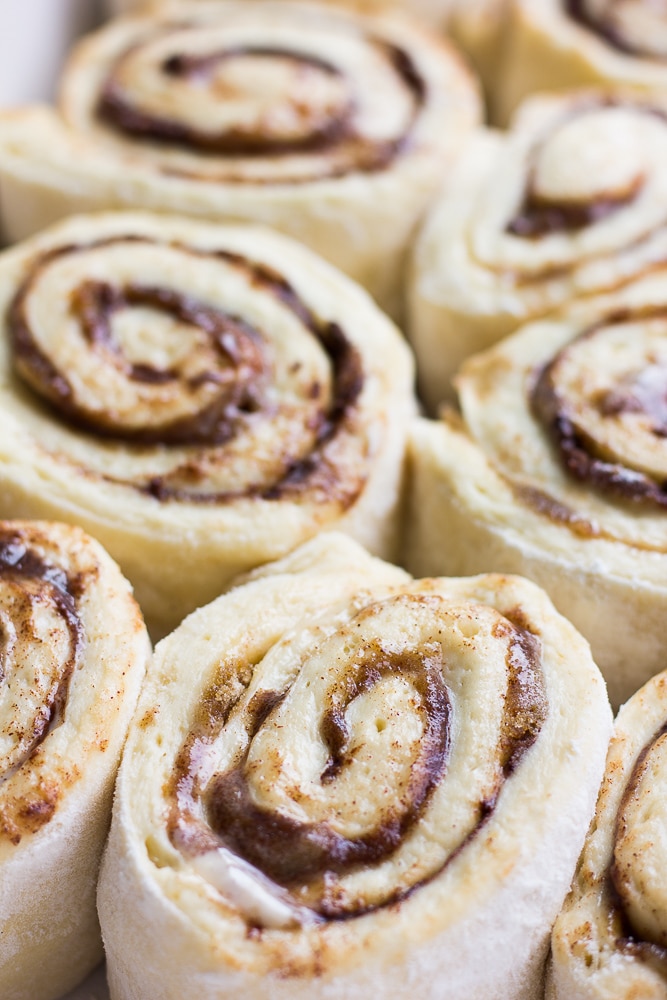 They will also rise more in the oven, and get really big and fluffy! 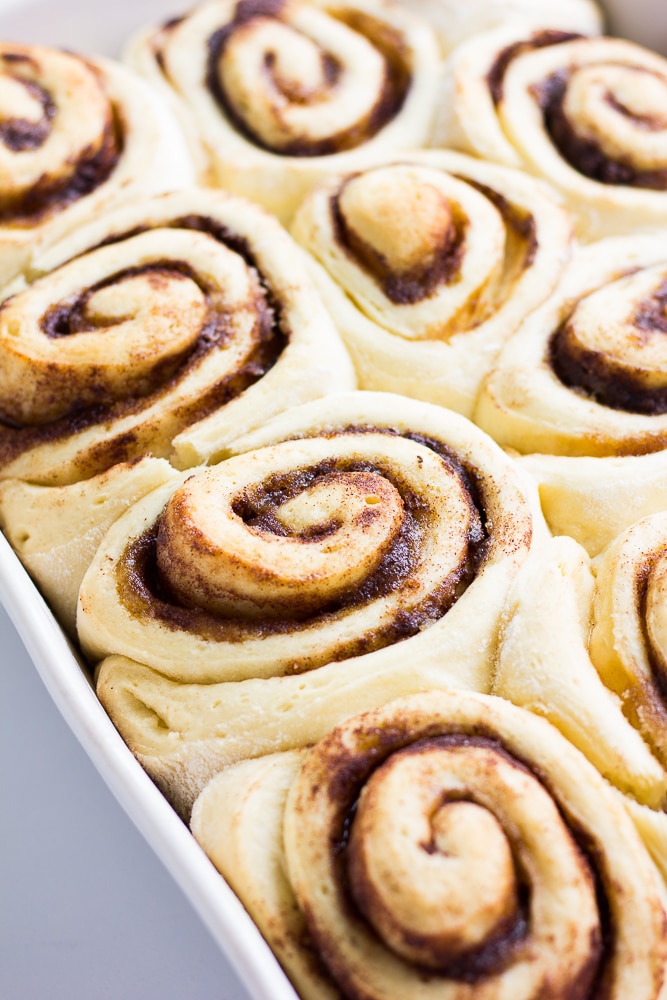 What kind of icing for vegan cinnamon rolls?

I prefer a simple vegan cream cheese icing. All you do is add 8 ounces of vegan cream cheese (I like Trader Joe’s or Kite Hill brand), 1 1/2 cups powdered sugar and 1/2 teaspoon vanilla to a large bowl. Beat with a hand mixer (or stand mixer) until smooth and creamy.

You can also make a very simple icing out of 1 cup powdered sugar, 2 tablespoons soy milk and 1/4 teaspoon vanilla. Just whisk it until smooth in a bowl.

Let the cinnamon rolls cool for 10 minutes before icing and serving. Enjoy! 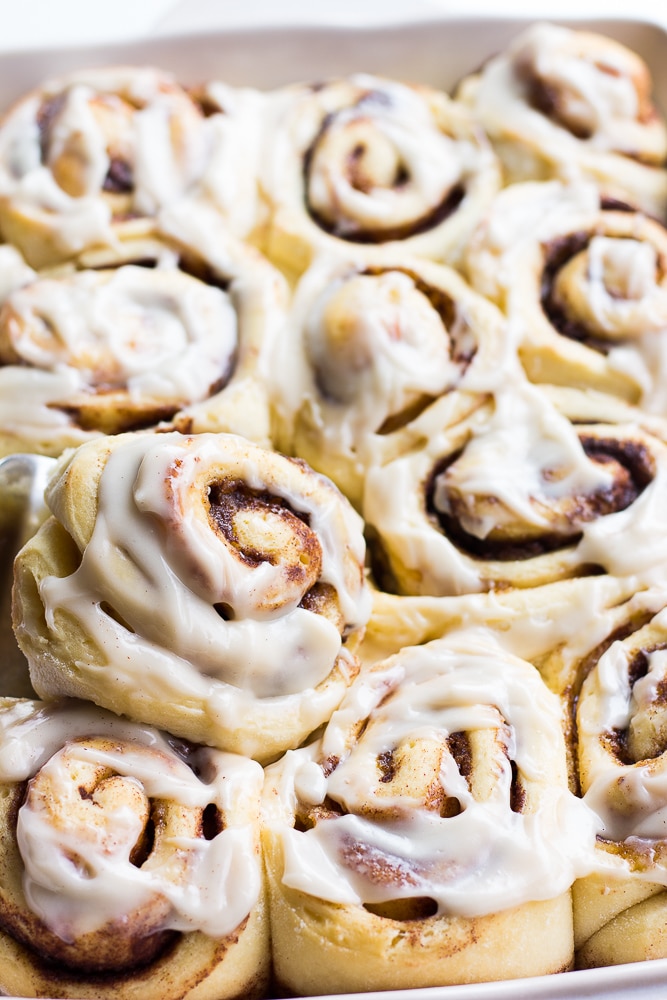 If you want to prepare these cinnamon rolls overnight for an easy morning (perfect for holidays when you have company), simply follow the instructions up until the point where you have sliced them and placed them in a baking dish. Then, cover with plastic wrap and place in the refrigerator overnight.

In the morning, take them out of the refrigerator and let them sit for about an hour. Then, simply preheat the oven to 375 degrees F and bake for 20-30 minutes until done. 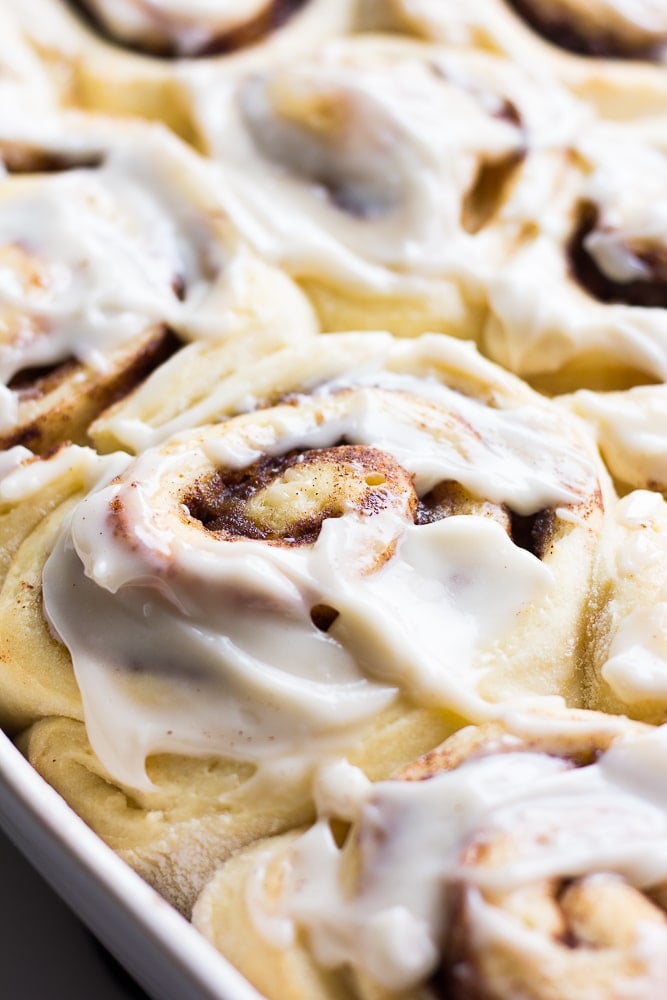 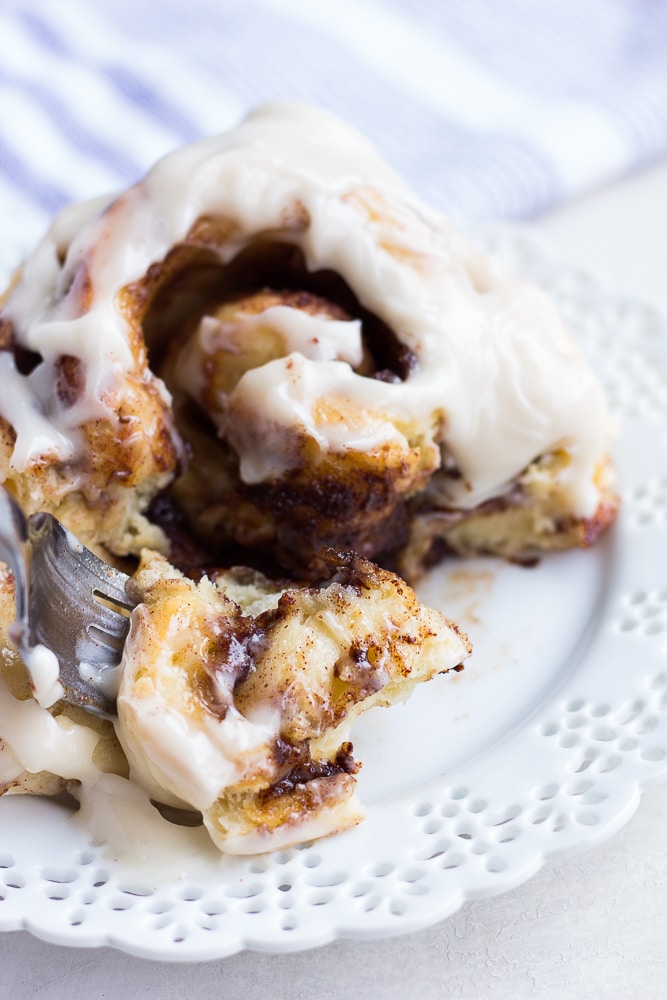 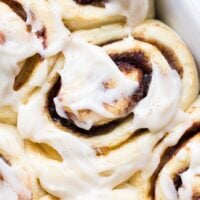