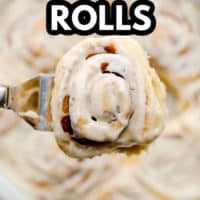 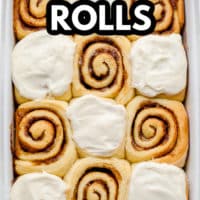 Super soft and delicious vegan cinnamon rolls can be made in 1 hour! Loaded with cinnamon sugar gooey goodness and topped with heavenly cream cheese icing. You won’t believe how big and fluffy they are!

These are the BEST EVER vegan cinnamon rolls! They are so soft, fluffy and moist. No one would ever guess they’re vegan.

You can make them in about an hour from start to finish, or prep them the night before and pop them in the oven in the morning. I love overnight rolls for lazy weekend or holiday mornings.

Homemade cinnamon rolls taste 1000% better than those store bought rolls in a tube. Plus they will make your home smell incredible! In the fall, you may also enjoy these Pumpkin Cinnamon Rolls. Or Strawberry Rolls in the spring!

How do you make vegan cinnamon rolls?

This is an overview with photos of the process. For the complete, printable recipe, scroll down to the recipe card at the bottom.

In a large bowl (or the bowl of your stand mixer), add warmed milk, sugar and quick cooking yeast. Let it sit for 5 minutes, until it gets a bit foamy. This is how you know your yeast is fresh and working.

Add the melted vegan butter, salt and flour, and mix (I used a stand mixer with dough attachment).

Add 1/3 cup more flour at a time, as needed. The dough should still be slightly sticky and soft. You don’t want it to get too dry, or your rolls will be dry.

Turn the dough out onto a lightly floured surface, and knead for 3-4 minutes, until a smooth ball of dough is formed (if using a stand mixer, simply mix with the dough hook for about 2 minutes).

Place the dough back in the bowl, cover with a towel and let rise in a warm place for 20 minutes. It should nearly double in size. WHAT I DO: I preheat the oven to 170 degrees F, then once heated turn it off, place the bowl inside and leave the door cracked.

Starting with the long end closest to you, roll up into a tight log.

Cut off the ends with no filling, then slice into 12 rolls.

Bake for 20-30 minutes, until the rolls are golden brown and the centers are cooked through. They will also rise more in the oven, and get really big and fluffy!

I usually just use a big sharp knife to cut the rolls. Some people like to use unflavored plain dental floss! It works well and prevents smushing the soft dough.

To use floss, grab a long piece, pull it tight and get it under the roll of dough. Pull the ends tight to cut the roll.

How to store vegan cinnamon rolls

The rolls are going to be best right after baking, when fresh and warm. Leftover rolls will keep for 2-3 days, covered at room temperature.

You can also freeze leftover rolls. I like to rewarm them in the microwave before serving. 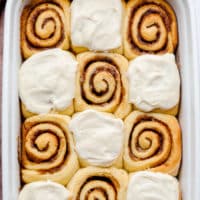 This recipe was originally published in May 2019 and has been updated with improved photos and more helpful information.