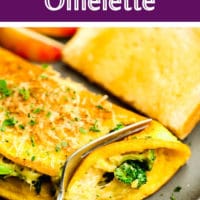 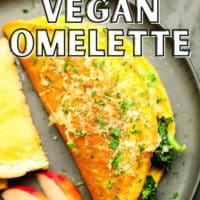 This JUST Egg Omelette looks and tastes just like the real thing! Fluffy, flavorful, and filled with veggies, it’s one of the easiest vegan breakfast recipes you can have ready in only 10 minutes.

This post is not sponsored by JUST Egg. I truly just think it’s a great product! 🙂

It’s hard to believe this JUST Egg Omelette is made without any eggs at all! Fluffy, filling, and just so delicious, you may have to remind yourself that you aren’t eating real eggs as you dig into this recipe.

JUST Egg is a company that really makes you feel good about where the future of plant based ready-made foods is heading. Just like liquid eggs, this vegan egg mixture is simply poured into a hot pan with a few extra add-ins and quickly turns into a fluffy vegan omelette. It’s one of the most innovative vegan products on the market and I think you’re really going to love it!

If you can’t find JUST Egg where you live, you will love my Vegan Omelette made with simple pantry ingredients.

I made this easy eggless omelette with simple fillings like spinach, broccoli, and vegan cheese. You can fill the inside with almost anything you love and drizzle on a few fun toppings when it’s done, like herbs, hot sauce, and even vegan cheese sauce. Make the meal extra special with breakfast potatoes and fresh fruit on the side, then enjoy!

What is JUST Egg made of?

JUST Egg is a liquid vegan egg mixture made from two key ingredients: mung beans and turmeric. There are a handful of other ingredients in the mixture to help the cooked “eggs” taste realistic, hold together, and preserve the quality.

How to make a vegan omelette with JUST Egg

Melt vegan butter in a small pan and saute the veggies until they’re soft. Set them aside and turn the heat down.

Whisk the JUST Egg with the flour, baking powder, and black salt in a bowl. The flour/baking powder helps the omelette cook up fluffy and the black salt will help it taste even more realistic!

Pour the vegan egg mixture into the hot pan. Cover with a lid and let it cook until it’s no longer liquidy on top. Add the cooked veggies and shredded cheese on one side of the omelette, then fold the other side over top. Let it cook for a few more minutes or until the cheese melts.

Serve the omelette immediately with your favorite toppings and enjoy!

The taste, smell, and texture of JUST Egg is almost identical to real eggs. Mixing the “egg” liquid with some black salt (Kala Namak) really takes the flavor up a notch and gives the omelette a true “eggy” taste.

An eggless omelette is only as good as its fillings. With veggies, vegan meats, and cheeses on the inside and a fresh garnish on top, every bite will be heavenly. Use these ideas to get started: 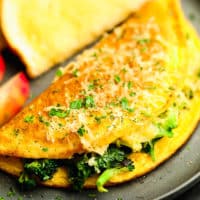