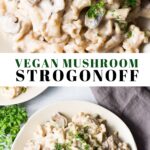 This is The Best Vegan Mushroom Stroganoff! Made with tender mushrooms, a creamy gravy-like sauce, and noodles, this one-pot recipe is perfect for family dinners and can easily be made gluten free.

Looking for a warm and comforting family dinner that’s ready in less than 30 minutes? This creamy mushroom stroganoff is the answer!

Just like my Vegan Alfredo, Baked Ziti, and Spaghetti and Vegan Meatballs, The Best Vegan Mushroom Stroganoff was easy to “veganize” using simple ingredients. Tender mushrooms are mixed together with a gravy and cashew cream sauce before your favorite cooked noodles are stirred into the mix. After one bite, you’ll have to agree that vegan stroganoff is the ultimate comfort food!

Looking for a gluten free stroganoff? No problem! Simply swap the pasta noodles and the all purpose flour with your favorite alternatives. You can even freeze the sauce and heat it up for a quick, easy, and warming dinner to enjoy later on.

What is mushroom stroganoff?

Stroganoff is a Russian dish traditionally made with beef, noodles, and a sour cream (smetana) sauce. The popular vegetarian alternative swaps the beef for mushrooms and in this vegan version, a cashew cream sauce is used instead of dairy. It’s hearty, comforting, and so delicious!

Cook your pasta according to the package instructions, then drain it well and set it aside.

If you haven’t already, quick soak the cashews by pouring boiling water over the nuts in a bowl. Let them soak for 5 minutes, then place them in a blender with fresh water and apple cider vinegar. Blend until smooth.

Add the onions and mushrooms to a large pot on the stove.

Cook them over medium-high heat until the mushrooms are tender. Stir in the garlic.

Sprinkle on the flour, then stir it in.

Slowly stir in the vegetable broth and dijon mustard next.

Bring the mixture up to a boil, then reduce the heat and let it simmer for a few minutes. Once it’s thick, stir in the cashew cream.

Finally, stir in the cooked pasta. Taste and add more seasonings as needed, then serve!

Stroganoff is a hearty dish, so I recommend serving it with fresh parsley or dill on top and lighter, vegetable-forward side dishes. My favorites are green salad, steamed kale, air fried asparagus, and steamed or roasted broccoli.

For the best results, serve this as soon as it comes off the stove. The leftovers will last for 2 or 3 days in the fridge. It will thicken as it sits, so feel free to stir a few tablespoons of water into the stroganoff before reheating.

To reheat, add the leftovers to a pot over medium heat on the stove or heat them for 1 or 2 minutes in the microwave. 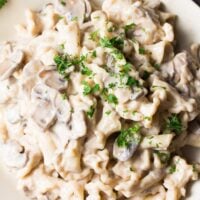 This recipe was originally posted September 2019 and has been updated with improved writing. The recipe is the same.